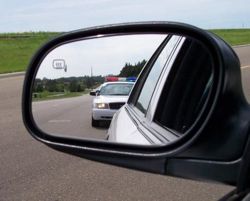 The initial stop must be supported by facts and circumstances which makes the stop non-arbitrary. These facts and circumstances include, but are not limited to, the police officer's observation of a independent violation of law, the occurrence of a motor vehicle accident involving the vehicle in question, notification of a witness, or being stopped at a sobriety check point. These are some of the reasons which gives the officer an “articuable” reason for the stop. (That is, a reason that the officer can articulate.) A mere hunch of speculation is not enough.

Assuming the officer has the articuable reason to stop the vehicle, they will approach the operator and request identification, drivers license, registration documents and insurance information. They will also be making preliminary observations of the operator’s demeanor, odor of an alcoholic beverage, coordination, ability to retrieve ID documents, ability to stand and walk, facial characteristics (i.e. bloodshot or glassy eyes) and condition of hair and clothing.

If the officer is satisfied that these initial observations warrant further inquiry based on their training and experience, they will probably request the motorist to exit their vehicle to submit to certain “field sobriety” tests. Please note that as yet the motorist has usually NOT been placed under arrest, so Miranda warnings are not yet required. You can also refuse to submit to any requested field sobriety tests, however refusal will usually be interpreted as a lack of cooperation on the part of the motorist and will have a direct bearing on the eventual release decision in the event an arrest occurs.

The field sobriety tests are designed to identify certain indicia of intoxication to support a subsequent arrest. Failure of any or all of these tests will also be considered by the officer in making the arrest/release decision. The motorist is not required to submit to these tests, however, refusal will probably be interpreted as a lack of cooperation by the officer and adversely effect the eventual arrest/release decision.

Assuming the motorist consents to submit to the field sobriety test, they will be requested to exit the vehicle, and will be instructed as to how to perform the test immediately prior to taking each individual test. It should be noted that each test is governed by a strict protocol and the instructions must be in compliance with the established protocol. Any deviation will subject the officer to intense cross examination at trial or pre-trial hearings. Indeed, the results of the test could be suppressed if the deviation is viewed by the court as significant.

Many police departments are equipped with dash mounted cameras which record the entire encounter of the officer/motorist. These tapes can be used to help prove or disprove intoxication.

The officer will also engage the motorist in conversation to elicit certain information as to where they are coming from, where they are going, if they have consumed any alcohol (where, when and how much). Please note that as of this point the officer has not yet made an arrest/release decision. Questions can be asked and answers recorded even though no Miranda warnings have been given. The motorist is not required to answer these questions and refusal may be interpreted as a lack of cooperation by the officer with a probable adverse effect on the arrest/release decision.

The officer will take all the information received through this pre-arrest procedure in making the arrest/release decision. If the officer is satisfied that they have sufficient information to support an arrest they will probably arrest the motorist for the Driving While Intoxicated (common law) violation of section 1192-3 V&T law. Please note that as of yet the officer does not have a BAC level which would be obtained if the motorist consents to a chemical test and one is administered.

The chemical test includes blood, breath, urine or saliva. The usual test is breath unless the motorist is incapable of submitting to the test due to physical limitations or injury. The motorist does not have a choice of tests and must submit or refuse to submit to the test customarily administered by the agency.

Assuming the motorist consents to submit to the chemical test, they will usually be transported to police headquarters to have the test administered by a qualified and certified officer in accordance with the procedure established by the manufacturer and under the rules and regulations of their agency. Any deviation from the procedures or rules could subject the results of the test to be inadmissible in prosecuting the motorist.

The effect of any deviation from the rules or procedure again emphasizes the importance of having a knowledgeable defense attorney review the record for compliance.

In the event the test is refused, the officer will complete certain affidavits and documents to be presented to the court at arraignment. The magistrate must, upon making certain findings, immediately suspend the motorists license or New York state driving privilege pending a hearing by a Department of Motor Vehicles’ administrative law judge to determine if the suspension should be converted into a revocation for a period of one year. This revocation will continue even if the motorist is subsequently found not guilty of the DWI charge.

In case you are confused as to how the motorist can be prosecuted for DWI without a chemical test, please remember that the motorist was originally arrested for DWI (1192-3 V&T law – Common Law DWI). The prosecution can attempt to prove guilt based on the physical manifestations of intoxication. It is not uncommon to observe an individual and, based solely on our observations, arrive at the conclusion that the individual is intoxicated. It is exactly these common sense observations that the prosecutor will use to convince the court and jury of the motorist’s intoxication. Chemical test results are only needed to prove a violation of the law specifically accusing the motorist of driving with a BAC in excess of the statutory level.