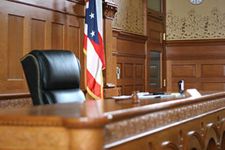 How a refusal to take a chemical test affects the arraignment:   Under New York State Law it is presumed that a motorist will consent to take a chemical test for the presence of alcohol or drugs, after having been arrested for Driving While Intoxicated (DWI) (1192-3) and being requested to take the test after being warned of the effect of a refusal. The arresting officer must warn the motorist who has been arrested that if they refuse to submit to a chemical test, their license, or New York State privileges for out of state motorists, is subject to immediate suspension upon arraignment and a subsequent hearing (within 15 days) before a Department of Motor Vehicles administrative law judge to determine if his license should be revoked for a period of one year regardless of the outcome of the DWI prosecution. This means that a motorist can be found not guilty of the DWI charge and still have their license revoked merely for the refusal. The actual language of the warning is not included in this outline since it is not the intent to be an exhaustive review of the law but only a general outline for information purposes. There is a administrative fee for the refusal which would be collected by DMV.

In practice, upon a refusal, the motorist is often immediately taken before a magistrate who will take the license and schedule a hearing. Bail is frequently set, especially if the motorist does not have another driver present whose sobriety is not in question. Commitment to jail is possible if the police department does not have temporary holding facilities.

Prompt suspension:   When a motorist is arraigned on a DWI (1192-2 or 2a) and the BAC indicated in the accusatory papers indicate a BAC of .08 or higher, the magistrate is required to immediately suspend his license pending prosecution. The motorist is entitled to a hearing to establish if certain criteria has been satisfied. If the motorist requests an adjournment, the court will adjourn the matter for no more than 48 hours, after which a hearing will be conducted. If the court is satisfied that the statutory requirements have been met, the motorist’s license will be immediately suspended pending the disposition of the matter. Under certain circumstances the motorist may qualify for a “hardship license” which gives the motorist very limited driving privileges.

Release decision:   Upon the request for an adjournment to retain an attorney or apply for a court appointed attorney, and the entering a plea of not guilty, the court is in the position to make a release decision. The release decision is largely left to the discretion of the Local Criminal Court Judge, however in certain circumstances, the Local Criminal Court judge is specifically prohibited from setting bail or is required to seek the recommendation of the District Attorney as to the amount of bail.

The Local Criminal Court Judge is specifically prohibited from setting bail when the accused is charged with a Class “A” felony or has two prior felony convictions, or is charged with being a fugitive from justice. In these matters bail can only be set by a Superior Court Judge.

In all other Felony matters the district attorney must be contacted and is entitled to input as to the amount of bail. The Local Criminal Court may accept or reject the district attorney’s recommendation, however, the court is required to consider the recommendation and after reviewing the defendant's criminal history, facts and circumstances of the crime charged and other factors bearing directly on the likelihood of the defendant's re-appearance in court when required, the court may set a bail in accordance with the recommendation or set a bail in a lower or higher amount.

The issue of release, either on recognizance (without bail) or with bail is controlled by the following facts:

The release decision may be conditioned on faithful compliance by the accused to certain requirements. These requirements include, but are not limited to, compliance to the terms of an Order of Protection, or other release terms.

If the accused fails to appear in court when required, the court may and usually does forfeit the cash bail and it will not be returned even if the accused later appears in court. A bench warrant for the accused will usually be issued in this case.

Release or commitment:   The court makes a release decision and either releases the accused, either on recognizance or bail, or commits the accused to the local detention facility.   The local detention facility is usually the county jail or in some cases another facility if secure detention. Accused are sent to this facility either if they have failed to meet the judicial or legal standards for recognizance or has been unable to post the required cash bail or bail bond to secure their reappearance in court when required.