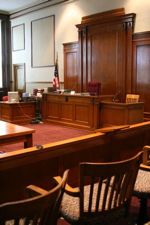 Trials at all levels are a single judge proceeding. The judges' responsibility is to be sure that the trial is conducted in accordance with legal and established procedural principles. The judge will be ultimately responsible for the orderly conduct of the trial, admission of testimony and evidence, control of the attorneys, witnesses, and, in jury trials, the jury. Any failures of the trial judge could result in an appellate reversal or dismissal. It is the responsibility of the judge to conduct the trial so that both the defense and prosecution will be accorded a fair trial.  Their rulings made on the spur of the moment, during the heat of the trial, are often subjected to extensive, deliberative appellate review.

Trials are divided into two major categories; Jury and Non-Jury Trials.
Jury Trial:   Defendants charged with a criminal violation are entitled to a jury trial.  The jury is made up of 12 jurors in felony matters and 6 jurors in misdemeanor matters. The defendant may, in most cases, waive their right to a jury trial, however this waiver must be made in writing and in open court on the record.  The trial judge must be satisfied that the waiver is voluntary, and the defendant must have enough information to pay due regard to the seriousness of the charge, potential penalties upon a conviction, and the advantages and disadvantages in waiving a jury trial. Prior to allowing the defendant to waive their right to a jury trial, the court must make extensive inquiries of the defendant as to the above issues.  Merely being represented by an attorney, while important, is not enough for the court to permit a waiver of a jury trial. In a jury trial, the jury is the finder of fact and must decide guilt or innocence in accordance with the evidence admitted at trial and the instructions of the judge.

Non-Jury Trial (Bench Trial):   Trials for petty offenses, (traffic infractions and violation) are never before a jury.  They are referred to as bench trials.  The evidence and testimony will be presented to a single judge, who will determine the facts of the case and apply the law.  Jury  trials are not allowed for petty offense since they are relatively minor violations of law, with a maximum sentence being a possible short jail sentence, but usually involve a fine payment alone.
Contact Us