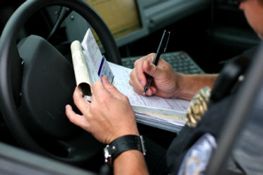 Each type of violation is treated differently depending of the seriousness of the charge.

A traffic infraction is non-criminal with little likelihood of a jail sentence. (For example, speeding, red light, stop sign). There are criminal charges started by the issuance of traffic tickets which will be discussed later. I will limit this portion of my outline to traffic infractions.

A traffic ticket is issued and a first appearance in court at some future date is indicated on the ticket. An immediate appearance before a judge is possible, but not likely.

You can plead guilty or not guilty by mail by completing the applicable waiver on the traffic ticket.

A plea of guilty constitutes a waiver of an attorney and trial. This is not recommended unless the charge is very minor (i.e. equipment) and when the applicable penalty is slight and usually less than an attorney’s fee. If you plead guilty by mail the court will assess the fine and surcharge and advise you by mail. Payment of the fine and surcharge will conclude the matter. Failure to pay the fine can result in your driver’s license being suspended by the Department of Motor Vehicles (DMV) after being notified by the court.

A plea of not guilty in person or by mail will result in a trial or hearing being scheduled. You always retain your right to an attorney.

At the arraignment you will be advised of the charges against you, and notified of your right to have an attorney and get a supporting deposition. If you waive an attorney and plead guilty, the court will assess fines as specified above. Payment of the fine is expected at the time of appearance, although some courts will grant additional time for payment.

Fines for most traffic violations are specified in the law with a minimum and maximum.  They can vary depending on the nature of the violation and whether there is a record of any prior conviction. (i.e. A judge is required to set a higher fine for a second or subsequent speeding conviction within 18 months.) The court is also permitted a range of discretion in setting fines and is permitted to consider the motorist’s overall driving record, age and the nature of the charge in setting the fine as long as it sets a penalty within the statutory range.

A penalty such as a jail sentence is also permitted in many cases, and can be imposed at the discretion of the judge. This drastic penalty is seldom imposed, but the mere fact that jail is a possibility should give the motorist accused of a traffic infraction pause to consider consulting with an attorney.  The issue of a potential penalty, including jail in some cases, should not be left to chance, and the advice of an attorney experienced in traffic law defense is critical.

The New York legislature has passed statutes requiring that a surcharge be collected upon conviction of a plea of guilty for almost all violations of law including vehicle and traffic violations. A surcharge is usually $85 for moving violations and $55 for equipment violations. The court has no discretion and must collect the surcharge.

Driver improvement points are specified in the law. The court has no option since the points are imposed by the DMV. A motorist may accumulate no more than 11 points in an 18 month period before DMV will take administrative action against the motorist’s license. DMV Points can only be saved by pleading to a reduced charge which carries fewer points. An attorney is usually required for a negotiated plea. Note: many insurance companies will increase a motorist’s automobile insurance premiums if they accumulate too many points for various violations such as speeding.

Discretionary sentences: Courts have wide discretion in setting additional requirements as part of a sentence. Requiring a motorist to enroll in a defensive driver program is common and in some cases the court can require as a condition of the sentence for the motorist to engage in some community based activity. In extreme cases, where the violation is of a nature as to create a severe hazard to the motoring public, such as extremely high speeds or road racing, the court is authorized under section 510.3 of the vehicle and traffic law to suspend the motorist’s license to drive.

Most common ways for a license to be suspended or revoked:

If a supporting deposition is requested, either by mail or in person, it must be supplied within 30 days from the date of the request, or 5 days before the trial, whichever is shorter. If it is not filed, the charges will be dismissed upon the motion of the motorist or their attorney.